Compilations have such a lot going for them, but for the member who usually takes a principal role in a book show there is no opportunity to become a character/star, and for that reason they may opt out until something more of a vehicle for themselves comes along. I was impressed by the fact that all of your seasoned performers took part and that others weren’t overlooked in their favour. Absolutely everybody had a moment in the spotlight.

My first thoughts on seeing the extensive stage design was what a wonderful area to work with and James made good use of every inch with attractive groupings on the various levels.

The first number ‘Tonight’, was simply and artistically set and was performed with sensitivity by Vanessa and Nathaniel. There was a small problem in that the balance of voices was uneven. Vanessa has a strong voice and needed less amplification than Nathaniel, a technical detail which was down to the sound department.

‘America’ was bursting with energy and Aileen sang and acted ‘I Feel Pretty’ delightfully. The props and stage business added to mood of the song. In ‘Maria’, the choreography was beautifully performed by the dancer, and using an ensemble rather than the traditional soloist for the song added dimension and put a different slant on the lyrics

All the Seven Brides for Seven Brothers selection went with a swing. ‘Wonderful Day’ was nicely set and John, after an amazing 50 years on stage, was still able to sing ‘Beautiful Hide’ with a twinkle in his eye! I enjoyed the fun ending too. ‘Sobbin’ Women’ was good and there was more fun in Paula’s ‘Goin’ Courtin’’

‘Adelaide’s Lament’ is not one of the best-known songs in Guys and Dolls and for that reason it was good to include it. Sarah performed it well and has a sound singing voice but, perhaps partially because of the necessary Brooklyn style accent, it wasn’t always easy to hear the words. ‘Luck be a Lady’ was put across with gusto and ‘Bushel and Peck’ was prettily sung but the highlight was ‘Sit Down You’re Rocking the Boat’ which was brilliant. Amanda did a super job with it and how great to have a woman singing the lead part.

It was really encouraging to see the younger generation involved in the production and you have some very promising performers amongst them.

In ’Good Morning’ with Will and Ashley (I’m afraid I don’t know one from the other) the taller one acted really confidently with perhaps slightly less strength in his singing voice, and the other young man had a lovely singing voice but was a little lacking in confidence with his acting. Experience will make two good all-rounders of them. Vicky’s performance was lovely. She has a pleasant singing voice and moves beautifully. Maggie and Jerry’s duet was good, but oh ladies-–– please smile! ‘Singin in the Rain’ was super, an original interpretation and well presented by Roy Selfe and the children.

Gill Sermon has a pretty voice but appeared very tentative in ‘S Wonderful’ so possibly it was the first time she had sung alone.
The long tap routine, ‘I Got Rhythm’, was well rehearsed and the number made a strong finale for the first act (reel!)

Act 2
The Kiss me Kate section started strongly with ‘Another Openin’’ and an attractive picture to finish, and Jenny Poore brought out the comedy really well with her single prop of a broom in ‘I Hate Men’. The comedy continued with Roy and Ian’s excellent acting in ‘Brush up Your Shakespeare’ and Connie gave us a most accomplished ‘From this Moment On’. James’s singing was first rate and his diction perfect in ‘Were Thine that Special Face’

The simple bar stools and table were all that Maggie and Mike needed to produce a relaxed and sophisticated ‘Who Wants to be a Millionaire’. ‘True Love’ was a little shaky in parts but ‘Swell Party’ was good.

Fiddler on the Roof is one of my favourite shows and what a treat this interpretation of’ Matchmaker’ was. The song can be rather twee and wishy-washy but Aileen was brilliant, giving us an extremely comic Yente and bringing the number to a different level. Singing the song that everyone associates with Topol is no easy task but Howard Chapman rose to it. The presentation was a little static, perhaps some movement, if only a few steps, would have added to the overall effect, but his voice was beautiful. ‘Sunrise Sunset’ was nicely staged and Aileen’s ‘Far from the Home I Love’ was fabulous. Mike also rose to the challenge and sang and acted ‘Do You Love Me?’ extremely well, but Donna could have shown more reaction to Tevye’s question, which after all was more than a little puzzling to her.

Jo and Ian both acquitted themselves well and led the children enthusiastically in the first two numbers from Annie get Your Gun and the children are to be congratulated on singing and acting so ably.
‘Moonshine Lullaby’ was a well-chosen contrast to the rousing ‘No Business like Show Business’ to end the section.

For each individual to take a bow was unnecessary and the curtain call was far too long. I think I know what James was trying to do but it didn’t work. There was uncertainty as to what was happening to start with as the first person did not come on with a flourish, but rather as though she were going to sing another song. A more definite start would have helped, but groupings would have worked better. I can see why the call was at that point because ‘Somewhere Over the Rainbow’ was beautifully set and sung and left the audience in a contemplative mood after the varied and enjoyable evening’s entertainment.

The dances and movement were well choreographed throughout, both the straightforward and the more specialised. In one of the numbers, the dancers were all wearing different footwear. I believe one was in points, a couple in ballet pumps and one in bare feet.

Costumes were good and suitable for the various numbers.

Some slow cues in the lighting department but overall the right atmosphere was created,

The sound system was not as consistent as it might have been and there was interference on personal mikes.

Your programme is unusual and well presented.

I was delighted to come back stage to give John his 50 year award and I wish him and HOS many more years of entertaining.

Thank you for inviting me to see ‘MGM’ and for your kind hospitality on the evening. 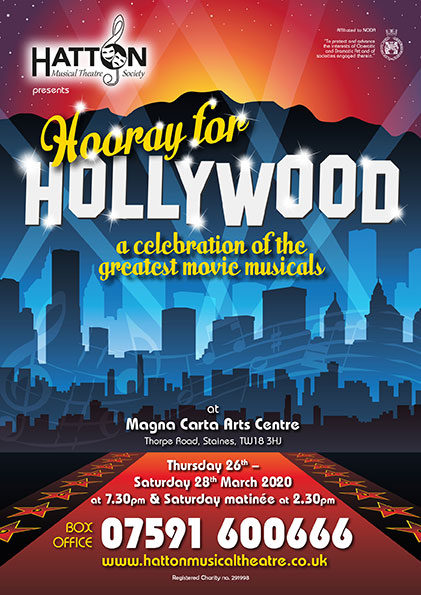